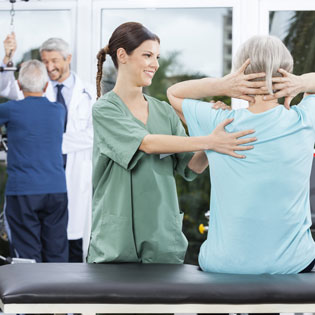 Older people undertaking stretching exercises have  shown improvements in their flexibility,  range of motion and their balance which prevents dangerous falls.

The identified decrease in flexibility appears in the ageing populations, and fall risk has also been shown to increase with age. These falls have far reaching impacts on their independence, confidence, health and may even be fatal.

The ability to maintain themselves over their centre of balance is reduced with limited range of joint movement and muscle contribution of the lower limbs.  The stiffness of joints and muscles decreases the ability of elderly people to engage muscles and enact movement to recapture their balance and this increases the likelihood of falling

In a study by  Reddy, R. S., & Alahmari, K. A. (2016). Effect of Lower Extremity Stretching Exercises on Balance in Geriatric Population. International Journal of Health Sciences, A 10 week static stretching exercise regime of the hip flexors, hamstrings and calf muscles increased the range of motion in elderly subjects by 20-30%.

The study suggested changes in the muscles, tendons and the positional feedback loop in nerves to and from the muscles were enhanced as the flexibility increased

This easily implemented exercise therapeutic intervention can be applied to persons of high age without any distress and used as a preventative measure for the less elderly.

This will reduce the incidence of falling which is one of the  the leading causes of fatal and nonfatal injuries in the elderly.